Finding oil on the outside of your engine is never a good sign. Your engine needs oil to work and if it loses a lot then the engine will stop and in some cases, permanently. This is because the oil keeps parts lubricated to allow them to move. When oil is missing from the engine, then moving parts rub against each other eventually causing enough friction to melt out of shape and stop the engine. 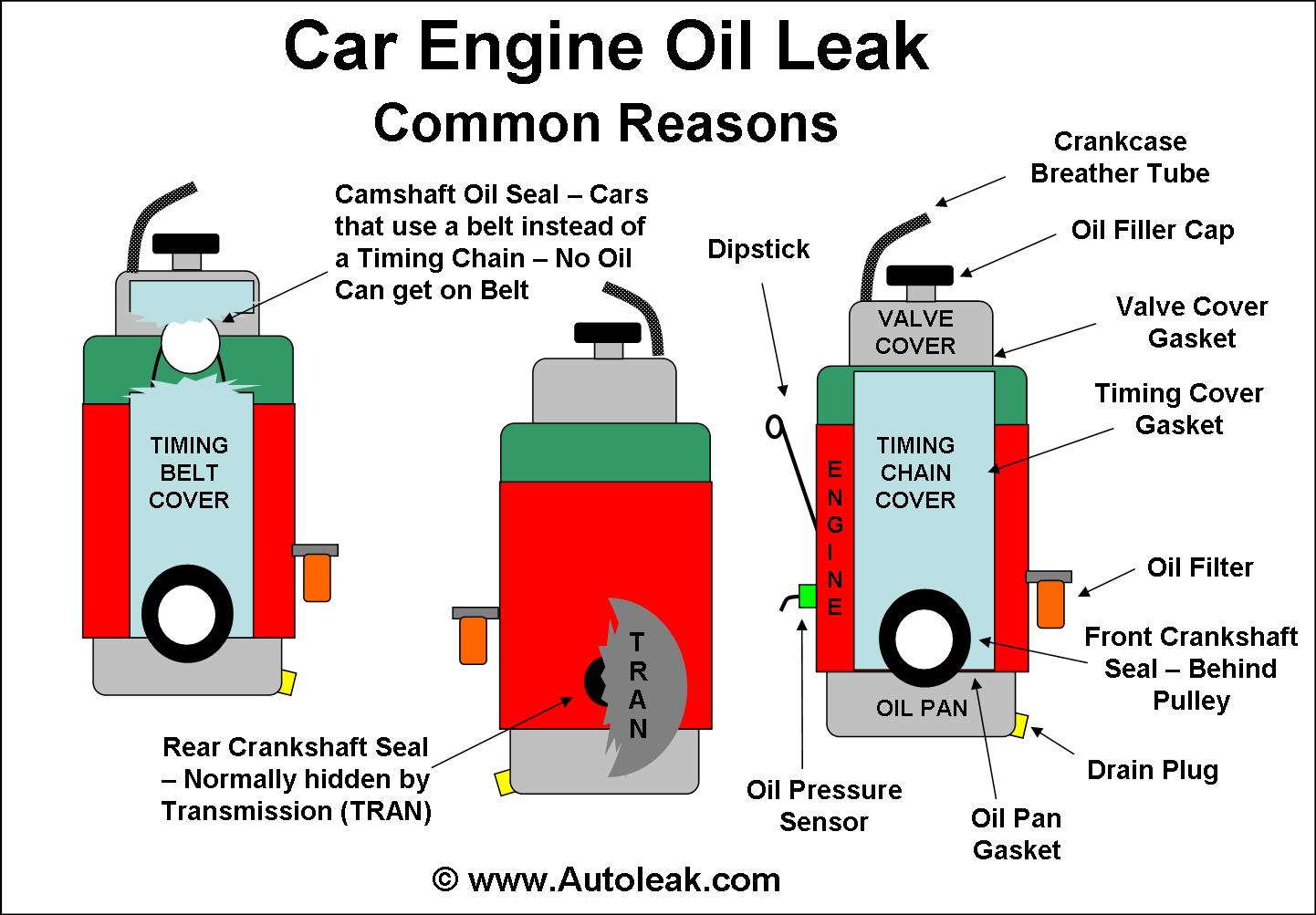 When you have found that oil is leaking from the engine you need to consider its source and then how to fix it. The speed at which you do both these things will be dependent on how quickly the oil is leaking and how environmentally concerned you are.

If you are looking for a quick fix to your engine oil leak, you could always try the additives approach. This is where you add a chemical to the oil in your engine or change your oil to one that has the additive in it.

Additive For Oil Leaks are chemicals added to your engine oil that try to stop leaks. They do this by filling in small holes in Oil Seals and by causing Oil Seals to expand/soften. Only problem with them is sometimes they make the Oil Seal expand too much which cause the Oil Seal to destroy itself. This will make a small oil leak into a big oil leak.

A common place to lose oil from is the Valve Cover or Covers (if you have a V type engine V6, V8  etc. or boxer engine).

Valve Cover is attached to top of engine (cylinder head). It covers the valves which are soaked in oil. Oil allows the valves to move freely as the engine works. Valve Cover Gasket purpose is to seal the Valve Cover against the cylinder head to prevent the oil escaping. Valve Cover Gaskets wear out after a few years and allow oil to escape down side of engine. Common side effect of the Valve Cover leak is that it makes the accessory belt slip (this belt runs alternator, cooling pump, power steering, air conditioning) creating a screeching sound when the engine is running. Belt is ruined if oil is allowed to soak into it to the point that it slips. So after you fix the leak, you will need to replace the belt.

If you have most of the leak at the bottom of the engine, then it may be caused by the Oil Pan gasket.

Oil Pan contains the oil used by engine to keep engine parts free to move. When you check oil level with the dipstick, it is usually showing the depth of oil that is currently in the Oil Pan attached to bottom of engine. Oil Pan Gasket is used to stop engine oil from escaping from Oil Pan. Oil Pan Gasket wears out after a few years and allow oil to escape down the side of the Oil Pan. In some cases the bolts that hold the Oil Pan tight to the engine get loose allowing oil to escape.

The next two items are common causes of an Engine Oil leak brought on by your last Oil Change.

Oil Filter removes any dirt from engine oil as the oil is pumped around the engine. Dirt ends up in oil as engine parts wear and those worn bits get carried off in the oil. Oil Filters which are not screwed on tightly enough to the engine can allow oil to escape. You can also add that incorrect Oil Filters (i.e. too small so they cant be tightened enough) can also cause the same issue. If you see Oil dripping off your Oil filter then this may be the cause but note that the leak may still be from somewhere higher up than the Oil Filter.

Oil Drain Plug allows oil to be drained out of the Oil Pan. This means it gets removed every time you have your oil changed. Oil needs to be changed in an engine regularly. Drain Plug can get damaged and worn out. Where the drain plug goes into the Oil Pan can also get damaged. Damaged or dirty Drain Plug will allow oil to escape from the oil pan.

Older engines will have Engine Oil Leaks likely caused by seals wearing out. Seals are used against rotating shafts to stop oil escaping. A regular gasket cannot be used since there is movement involved.

Aside from seals there is one other gasket that can fail over time causing an Engine Oil Leak but this only applies to cars that use a Timing Chain instead of a Timing Belt.

Now for some other obvious reasons for oil leaks.

Crankcase Breather allows pressure which may build up in the oil pan to escape. When the pressure escapes, it brings oil with it. Over time the Crankcase Breather Tube can fall apart allowing the oil air mixture to escape onto the Engine or Valve Cover. To fix, replace with similar size and shape hose. If the right shape of hose cannot be found then another hose can be used with a metal coil that goes around the hose to keep it from collapsing as the hose is bent into the correct shape. The metal coil is available from auto part stores.

Oil Cap allows engine oil to be added to an engine and is usually located on top of a Valve Cover. Over time an Oil Cap can wear out or be lost allowing oil to escape from the Valve Cover. To fix, replace the Oil Cap.

Dipstick measures the amount of oil that is in the engine. If Dipstick is left out, then oil can escape out of the hole it goes into. To fix, ensure that a Dipstick is in the hole.